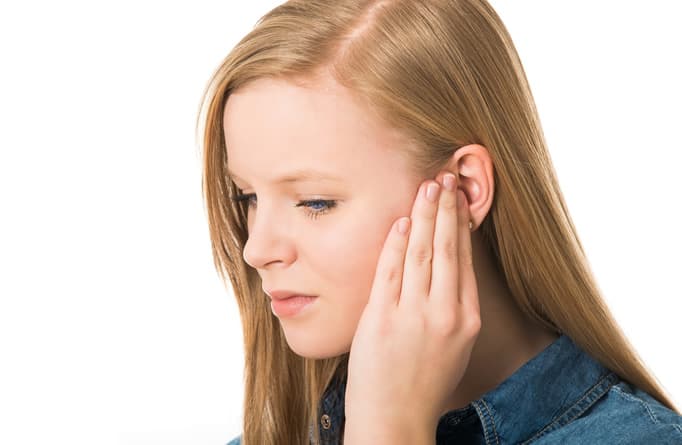 Taking off in an airplane, swimming completely submerged, or riving up a canyon, all of these situations can cause pressure in the inner ear [1, 2]. The result is ear congestion, or ear fullness. Symptoms like vertigo, pain, tenderness, itching, muffled hearing, and tinnitus can sometimes accompany the ear congestion.

Ear congestion is the name we give to every condition preventing sounds from being heard clearly. It is one of the most frequent ear problems, and there is an increase in recent years due to a rise in upper respiratory tract infections. Also, as we use airplanes as a mean for transportation more frequently, it is logical and normal to expect more ear congestion problems.

But when should you worry, and what are all the causes of ear congestion? Generally speaking, an ear congestion can be easily treated with home remedies. But if it persists for more than five days, you should visit a physician.

The common causes of ear congestion include over-excessive nose blowing, high fever, allergies, and fluid in the middle ear [3]. However, there are other causes as well.

The medical term is otitis externa, or an infection of the ear canal [4]. Usually, this happens in the case of a fungal infection. Symptoms like itching, pain, and discharge are to be expected. Swimmers ear is common in infants and children, but it can affect people of all ages. Most commonly, swimmers ear is caused by Eustachian tube dysfunction.

The medical term for this condition is endolymphatic hydrops [5]. It is a condition when there is an accumulation of excess fluid in tissues or cavities of the body, more precisely in the labyrinth of the inner ear.

This noncancerous growth of the eight cranial nerve helps with balance and sound transmission to the brain. Acoustic neuroma is a rare condition that is slow-growing, and non-malignant [6]. Some of the symptoms include gradual hearing loss in one ear, aural fullness, balance issues, and numbness. Headaches are the end result if not treated. Surgical procedure is required once the growth becomes large enough to impinge on nerves controlling facial muscles.

An inflammation of the inner ear, Labyrinthitis usually results from a viral infection [7]. The condition affects the nerves responsible for hearing and balance, with symptoms including acute onset of vertigo that can lass for hours. Accompanying symptoms include nausea, vomiting, and imbalance.

The most frequent cause of ear congestion is earwax buildup [8]. In such case, home remedies that help break down the earwax and drain it out of the ear are more than welcomed. The buildup doesn’t cause disturbance until it completely fills the canal. However, it can lead to sudden feeling of blockage.

Infection to any part of the ear (inner, middle, or external) will cause congestion. The external infection usually happens when the canal remains damp for a long period of time. For example, being in a pool, sea, or in the shower for a long time. Water retention in the external canal will cause pain and congestion.

This benign cyst can develop in patients with a history of Eustachian tube dysfunction or in patients with chronic ear infections. The benign cyst is filled with dead skin cells. Symptoms include drainage, foul odor, dizziness, hearing loss, muscle weakness in facial muscles, and pain [9]. Treatment for the cyst includes antibiotics, but in aggressive cases, surgery might be needed.

Shortly called SCDS, the syndrome develops from a small hole in a bone of the inner ear covering the superior semicircular canal [10]. This canal is just one of the three that can sense head movement, balance, and acceleration. Vertigo and dizziness are the symptoms to pay attention to. SCDS usually occurs in people in their 30s and 40s.

In addition to earwax buildup, Eustachian tube dysfunction is the most common cause of ear congestion. The Eustachian tube is a narrow canal between the middle ear and the upper part of the velum and back of the nose. The role is to equalize pressure between middle air and atmosphere. Allergic reactions, fever, and sudden pressure change can block the Eustachian tube, and cause ear congestion. If the dysfunction persists for a long time, the middle ear will draw fluids from surrounding tissue due to the vacuum effect. The end result is a serious problem called “glue ear”, which is a cause of long-term ear congestion.

Should you visit a doctor?

If the ear congestion lasts more than a couple of days, and the pain is worsening, you should consult with a physician. Schedule an appointment with an otolaryngologist specialist just to be sure nothing is serious.

There are a number of home remedies you can easily try to relieve ear congestion. Here are some of them.

The best way to treat ear congestion is to prevent it. There are a number of ways you can prevent and avoid ear pain and temporary hearing loss due to clogged ear. In many cases, clogged ears are a result of a sinus infection. Therefore, your goal is to prevent the infection.