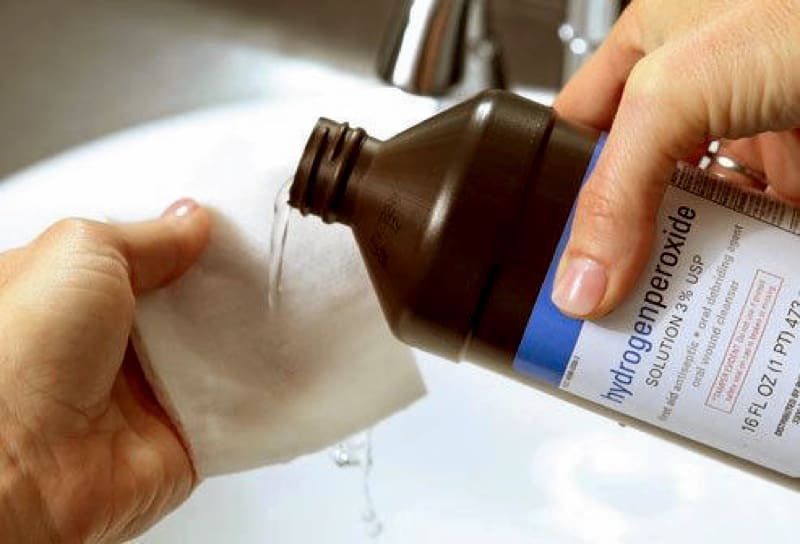 From a chemical standpoint, hydrogen peroxide is the simplest peroxide. It’s a compound with an oxygen-oxygen single bond. Its chemical usage is as an oxidizer, bleaching agent, and disinfectant. However, in the past several years, hydrogen peroxide has shown it can do much more, from a simple mouthwash to even healing some health conditions.

Hydrogen peroxide therefore deserves a place in every home. As the only germicidal agent composed only of oxygen and water, it’s considered one of the world’s safest, all-natural sanitizers. With that in mind, let’s take a look at everything you can do with hydrogen peroxide.

One of the much discussed topics regarding hydrogen peroxide is its usage for cleaning ear wax. Some people believe it’s safe, others claim it’s dangerous. In any case, ear wax is what protects your inner ear from dirt and foreign matter. The problem is too much of it can affect your hearing and cause pain, itching, and general dizziness. Hydrogen peroxide can help you clean moderate or mild amounts of ear wax.

If you clean your ears regularly, you’ll prevent hard buildup, which can trap bacteria in the inner ear. For the hydrogen peroxide treatment, you’ll need a towel, a bowl, and a 3-4% hydrogen peroxide solution.

Here’s how to do it.

Start by pulling your hair back. Then cover your head with a towel or a hat (to prevent hair lightening or discoloration from the bleaching properties of hydrogen peroxide). You want to protect your hair before starting the treatment.

Lie down on your left side, using a pillow to make it more comfortable (make sure to cover your pillow with a clean towel so that you catch any excess fluid that might come out of your ear).Use a flat or low loft pillow to keep the head level so your ear is parallel to the ceiling. Only by doing this can the hydrogen peroxide penetrate deep enough and prevent drainage coming out of the ear.

Pour hydrogen peroxide into your right ear. Initially, you’ll experience fizzing or pouring sounds. You might also feel a deep itch inside your ear. Don’t worry, it’s nothing serious. It’s just the sign that the hydrogen peroxide is activated and breaking down the wax buildup.

Lie still and let the hydrogen peroxide work its magic for the next 20 minutes. Stay in the resting position. As time goes by, the fizzing and popping sounds will become less intense and frequent. Just be patient and let a few minutes to pass.

Stand up, tilt your head to the right, and allow the solution to drain from the ear. Make sure to keep a bowl or towel under your ear as the solution drains (you don’t want to make a mess in your home!). You might notice small pieces of wax coming out of your ear as well.

Using the towel, dry the outside of your ear. Once your ear is completely dry, repeat the process on the left side. This time, rest on your right side. Make sure to cover your pillow with a clean towel so that you catch any excess fluid that might come out of your ear.

While some similar guides might recommend usage of cotton swabs, cotton balls, and hairpins, don’t use them. Using any of these might cause damage  to your eardrum or allow bacteria to enter your ear canal.

If you experience changes in your hearing after you try the treatment, consult your physician. Don’t repeat the treatment too often . If you clean your ears frequently with hydrogen peroxide, you might experience itching and dryness in the inner ear. Or even worse—bacterial infections.

During the cleaning process, keep your fingers out of your ear, even if you notice itching. Your fingers might carry germs, and you might cause an ear infection without realizing it. Never dip or soak contaminated cloths, fingers, or other objects in the peroxide bottle, as that will contaminate the entire contents of the bottle.

There are always two sides to a story. In terms of ear wax cleaning, there are some people who claim that the solution isn’t safe. However, scientific studies show that hydrogen peroxide is one of the safest and most effective treatments for ear wax.

For example, a 2004 study showed that while earwax irrigation is a common treatment, eardrops (usually made with hydrogen peroxide) are the most cost-effective way to treat the condition. Ear drops use hydrogen peroxide to soften the wax.

Another study, this one from 2015 and from Australia, showed that using water only to remove the wax can lead to complications. Therefore, eardrops are again recommended, as they have less room for error.

What is food-grade hydrogen peroxide?

There are different grades of hydrogen peroxide made for specific usages. For example, an electrical grade of the solution includes chemical stabilizers that prevent it from decomposing. The food-grade of hydrogen peroxide is one that has a concentration of 35%, and is more potent than what is usually sold in stores.

The benefits of this solution are that you get an effective and natural disinfectant. During the process of oxidization, the substance eliminates toxins and any other pathogens in the body.

What does food-grade hydrogen peroxide cure?

Let’s take a quick look at all of the benefits of food grade hydrogen peroxide. There are several ways you can use it to support your health. We’ll look at the many uses of hydrogen peroxide later on, but for now, here is a quick breakdown:

How to use food-grade hydrogen peroxide

The standard hydrogen peroxide offers a safe and natural treatment. But that’s a product with only a 3-5% solution. Food-grade hydrogen peroxide must be diluted prior to use. If not, it might cause health problems.

Food-grade hydrogen peroxide is a 35% solution intended for use in preparing or storing food.

Dangers and side effects

Most folk remedies with hydrogen peroxide are safe, and there are no side effects when you use the appropriate dosage of 4 drops per 8 ounce glass of distilled water. However, here are some problems that might occur.

Hydrogen peroxide in the body can release dangerous amounts of oxygen. Rapid release of the gas can cause the perforation of the stomach and intestines. While oxygen is beneficial and welcomed, excessive amounts in the bloodstream can lead to a gas embolism.

2 thoughts on “Hydrogen Peroxide: Is It Safe? And How to Use It!”