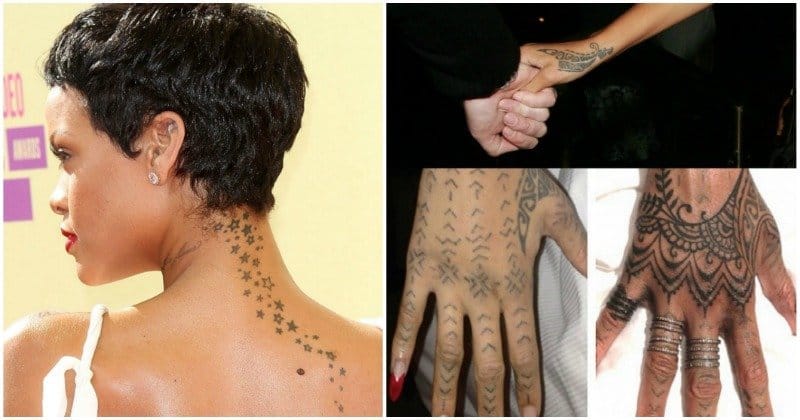 From what can be seen on Rihanna’s body, she has 22 tattoos. But who ever really knows except for the singer? She has said time and time again that she loves to hang out in tattoo shops, and that she is intrigued by tattoos. For the singer, tattoos are an entire culture, and she tries her best to study them. Bang Bang is an artist who is responsible for 12 of her tattoos, giving him the top spot as Rihanna’s personal tattoo artist. Let’s take a look at her body art and the meanings of her tattoos.

Rihanna has two stars tattoos on her body. One of them is very much visible, as the stars run down from her neck to her back. She also has a star tattooed inside her ear, which is less visible. She has never explained the true meaning of the stars, but one can safely assume it has some connection with Chris Brown. After all, the hip-hop singer also has stars on his body, and the two dated for quite a while. The one inside her ear, on the other hand, is a symbol for her friendship with her best friend. They both got in 2006, when her friend from Barbados visited her.

The very first tattoo Rihanna made is the musical note she inked in 2006. The two music notes are located on her left foot. One is a sixteenth note, and the other is treble clef. The tattoos appeared just as Rihanna was starting her musical career and musical journey. That is why people believe the tattoos represent her beginning in the music industry.

Rihanna replaced the musical notes on her foot with a tattoo of a large Egyptian falcon in June 2012. She shared the picture on Twitter, and according to the tattoo artist that did the ink, the falcon was actually the first tattoo she wanted as a teen, and back then, Rihanna wanted to cover her back with it. When she finally did it in 2012, she shared it with the caption “Falcon: a light that shines in the darkness! Never close their eyes during sleep.”

Many thought that the bird is inked in a way to look a lot like a handgun. Rihanna told Oprah the meaning of her tattoo, saying, “Back in the day, they would carve into the walls and they would carve a falcon, because they didn’t have another way of saying a king in the sky.”

The skull with a bow on her ankle is the only colored tattoo Rihanna has. All other inks are black, while the skull with a cross bone is colored in pink. The reason for the pink color is to neutralize the meaning of the skull, which is danger. This is the seventh tattoo Rihanna received, and she got it in 2008.

In 2006, when she was starting her musical career, Rihanna also got the Pisces symbol tattooed on her body. This symbol is located just underneath her ear. It is a rare astrology related tattoo on her body, and was done by a Brazilian artist. She was lucky to get the tattoo done, since the artist that made it books his clients three years in advance. Luckily for Rihanna, they were both in Tokyo at the same time, and the artist was available.

This tattoo is very much self-explanatory. Located on her back, on the left side, the “R” stands for her stage name, Rihanna. Her real name is Robyn Rihanna Fenty.

Rihanna jumped on the collarbone trend, and got a personal motto inked there. The motto reads “Never a failure, always a lesson.” Some people believe the transcribed words actually show she does not regret any of the tattoos on her body. But the same can be said for her love life and musical career. Asked about the motto, Rihanna has said that “Instead of considering things to be mistakes, considering them lessons is much better.” The tattoo is done in gray because the singer wanted to be subtle and not draw too much attention. In any way, it is a great motto to have and to live by. Taking the good out of a bad situation is a skill few possess.

Rihanna got this tattoo on her middle finger on the left hand. The fun part is that the tattoo is visible only when she holds a microphone. In any other case, you’ll have hard time noticing the ink. Done in a simple cursive font, the tattoo symbolizes her love for music, and her love life as well.

Speaking of finger tattoos, she also has one on her right hand, on the index finger. The tattoo “Shhh…” is one of the most copied Rihanna tattoos. Besides her fans, even other celebrities copy it. For example, Lily Allen and Lindsay Lohan did it after Rihanna. The tattoo is great for photos, since once you place your finger on your mouth, it reads “Shhh…”

Rihanna has few associations with Chris Brown when it comes to tattoos. The gun, located on the side of her torso appeared just months after she was abused by her then-boyfriend. She explained that she got the gun just so she can say to the world “I’ll never be a victim.” The gun is a symbol of strength, and it clearly shows Rihanna is strong enough to face any challenge in her life.

Located on her hip, the tattoo inked down translates to “forgiveness, honesty, suppression and control.” Her hip tattoo is fitting for the life she’s had, as she has always been in control of her destiny.

We said at the beginning that Rihanna and her best friend share a star tattoo, but they also share a birth date tattoo. It was in 2008 that Rihanna tattooed the date “4.11.1986” on her left shoulder in Roman numerals. That is the birth date of her friend Melissa. Her friend also got a shoulder tattoo, with Rihanna’s birthdate, 20.2.1988.

Almost anyone who has tattoos has to have a tribal sign. It is an unofficial and unwritten rule, so Rihanna followed the trend. The tribal is located around her wrist bone on the right hand. It continues towards the back of the palm, and just up to the beginning of the index finger. The design of the tattoo represents “strength and love,” and is inspired by the Maori people in New Zealand. She got the tattoo while she was there on a tour.

Rihanna has tattoos in English language, numbers, signs and also in other languages. For example, the tattoo on her neck, located on the left side is written in French. The tattoo reads “rebelle fleur,” which translates to “rebel flower.” Bang Bang did this tattoo in 2010.

On her left hip, Rihanna has a tattoo in Tibetan that reads “lover.” The tattoo was done in March 2012 and is located just above her butt.

Rihanna has placed the goddess Isis on her chest in memory of her grandmother. She did the ink when her grandmother passed away, and she tweeted “Goddess Isis-Complete Woman-Model for future generations-#GRANGRANDOLLY-always in and on my heart #1love”.

Speaking of ancient persons, Rihanna also has the Queen Nefertiti tattooed on her body. The small icon of the famous Egyptian queen is located on her left ribcage. Underneath the queen, Rihanna has inked an Arabic writing that translates to “freedom in God.”

Among the latest tattoos she has done is the small cross, which she had done on her collarbone. Again, Bang Bang is responsible for the tattoo, and according to him, the location is perfect because Rihanna can hide it with a necklace whenever she feels like it. Or she can show it in plain sight.

READ THIS NEXT: The Deep Meaning Behind 12 Of Angelina Jolie’s Ink