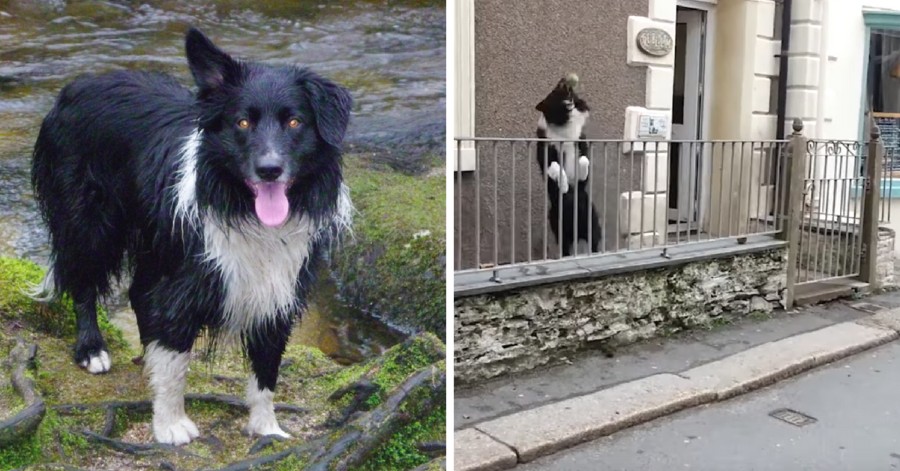 Meet the eight-year-old Ash from the town of Looe in Cornwall who is somewhat of a local hero in his hometown. According to his owners, he will happily repeat the process all day and never gets bored of playing with the people of his town.

“I cannot remember when Ash first started playing ball with passers-by, but it initially started when the ball would roll out due to slightly uneven ground. Ash soon figured out that if the ball went out people would throw it back to him. Ash learned to kick the ball out so that people would throw it back to him. He was playing catch regularly by the time he was two years old,” said Kerry, one of his owners.

According to Kerry, as soon as they get up in the morning, Ash runs to their front door waiting for them to let him out. If they’ve been out, Ash will put past us to get outside when they come back home.

“Ash can come inside whenever he wants to, we have two doors, the outer one is open all the time when he is out. If it is colder we will shut the inner one but Ash will bang on it with his paw when he wants to come in; it’s his favourite place.”

Ash will only play ball when he’s in the mood. If he kicks the ball out when there’s nobody around, he will sit and watch the ball like a hawk until someone comes and throws it. Kerry said if someone walks past when the ball is out, then he’ll stand up in case they notice it and throw it back to him.

Ash Is a Good Catch

“Occasionally people do not realise that the ball belongs to Ash and will pick it up for their dog or will kick it down the street. When this happens he will usually try to watch it in hope that he will get it back. Luckily we usually have some spares, we write his name on them and Ash gets a new ball. When people think he has lost the ball accidentally, they throw the ball back then walk on along the street,” Kerry said.

According to her, they will usually look back in time to see him push it back out. Then there’s usually an exclamation of ‘he’s doing it on purpose’. Then the strangers will play with him for a little while.

Kerry has seen children fight over whose turn it is to throw the ball next. Others even cry because they wanted to stay and play with him instead of going to the beach.

They hear a lot of laughter outside their house. All children love to play with him even adults!

Watch the video footage below and see it for yourself! Video courtesy of SWNS TV on YouTube.

“Ash is a funny dog; as my sister put it, ‘A bundle of fluff with an abundance of quirks’.”