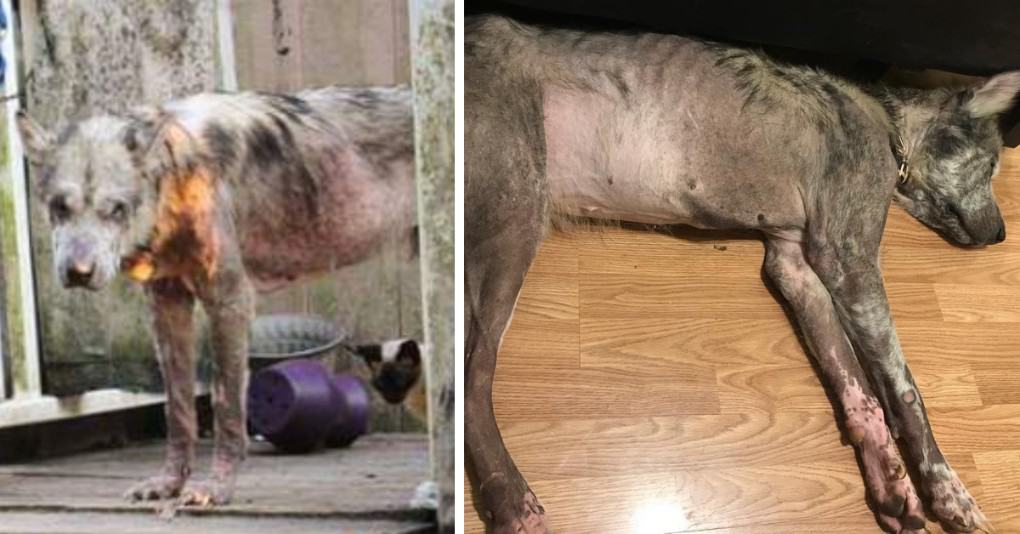 Chained up and ailing, a pair of breeders had completely abandoned a poor dog with several other pooches. While thinking that he will die in hunger and chains, he was rescued before its too late and was given a perfect home.

The Southern Pines Animal Shelter and Southern Cross Animal Rescue of Mississippi rescued Odin and other dogs neglected by their owners in October 2018. He was in an absolutely disturbing state so the rescue team knew that he needs medical treatment and foster home pronto.

Sydney Schelkopf, who’s already taking care of three Siberian Huskies, couldn’t believe her eyes when she first saw Odin and his horrible condition. He was an Alaskan malamute but he is far from looking even like a normal dog.

“Poor Odin looked like he was taken straight out from a nightmare. He was emaciated, almost completely hairless, covered in wounds, with cracked and broken teeth, and incredibly weak.”

“He had a putrid smell to him from his horrible skin infections. Basically whatever could be wrong, was with this poor guy!” Sydney told The Dodo.

Despite this, the dog-lover knew that no other person could provide for Odin’s needs, let alone a home to be in so she decided to step up. When she brought the ailing dog to his foster home, he was greatly confused as is he’d never had the chance to walk around before.

“I honestly don’t know if Odin had ever been inside a house before. He sniffed around the whole house and kept looking back at me like, ‘What’s the catch?’”

“For weeks after I got him, he would just lay in a spot. I couldn’t get him to play with toys or act like a normal dog,” Sydney added.

Regardless, Odin fought for his recovery and slowly healed from his skin infection and intestinal worms. Sydney’s initial plan was just to take care of the rescue dog for a while and find him a forever home after, but the sweet pooch captured her heart on his second day.

“The second night I had brought him home, he was brave enough to come to bed with me. He climbed onto the bed and just threw his bony body on me, looked up at me with such heartfelt eyes and sighed in such a loving embrace. I knew Odin had finally found where he needed to be,” Schelkopf stated.

Now, Odin is exactly the cute, loving and fluffy Alaskan Malamute that he was always meant to be. That’s thanks to his will to survive and be well and his owner’s heart to be the saving grace of a dying pooch.

“I just really think he is looking like a new dog. When we went to PetSmart yesterday, so many people were complimenting how gorgeous he was. No one believed me of the shape he was in just a few weeks ago!” Sydney wrote on Odin’s own Instagram account after the successful recovery.