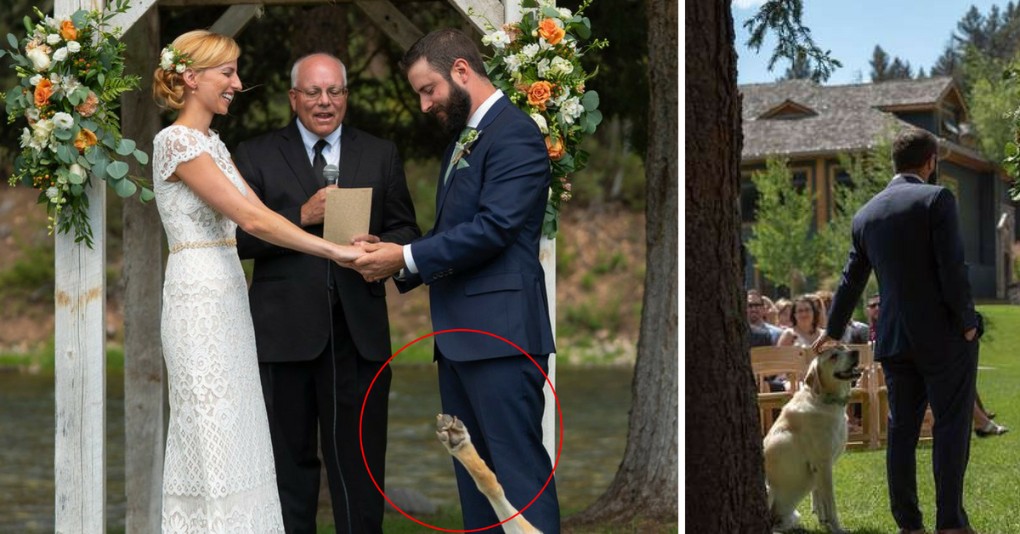 Have you ever imagined to have your dog as your best man or bride’s maid for your wedding day? Your own wedding would probably be one of the most important things in your life.

But celebrating it with your other lifetime partner a.k.a your dog would make your wedding day surely unforgettable and extraordinary. This couple’s wedding discovered at their recent wedding ceremony at the Rainbow Ranch Lodge in Big Sky, Montana, that their Labrador dog was photobombing their official wedding photographs.

It’s hilarious! These photos will make your day.

This 6-year old Labrador names Boone has truly a strong relationship with his dad, Jayce Conway. Ever since he was a puppy, he and his dad have done everything together.

He has been with Conway ever since he was a little pooch, just before he started dating Angie around five years ago. However, the couple had known each other since childhood.

“Boone basically goes everywhere that I will go,” Conway told The Dodo. “He would wake up with me at 4:30 in the morning, ride with me to work and then he would ride around on my golf cart with me all day while we managed the golf course.”

Jayce Conway started dating Angie Blumberg, a girl he knew from his hometown of Freeburg, Illinois. The two ended up falling in love and they have proven to everyone that having a long distance relationship for five years will not be an issue.

The two were living in different states and whenever they did spend time together, Boone was always there, too.

“Seeing Jayce take care of this dog so well was part of what made me fall in love with him,” Blumberg told The Dodo. “We’ve been a little family. He’s my bud.”

On July 28 at the Rainbow Ranch Lodge in Big Sky, Montana, Jayce and Angie have finally tied the knot. In the photo above, as the couple held hands in the opening prayer of the ceremony, Boone can be seen being bubbly while rolling around with a happy face.

Undeniably, Boone was photobombing his parents’ official wedding photographs. What a silly dog!

‏Photographer, Chris Davis of Good Road Co, caught the hilarious moment and shared the evidence on Twitter, which soon went viral. Check out his tweet below.

It's fun watching one of my images gain traction on the internet… now I just need some help from @darth or @dog_rates to know once and for all if a dog can graduate from good boy to best boy because I think that Boone has. pic.twitter.com/50kRCtXpQq

Can someone give Boone a medal from achieving a good boy status to the best boy? He definitely deserves it!

And, oh! What an amazing shot you have there, Chris.

“I didn’t want to tie any rings on him,” Conway said. “He is very well-behaved, but he cannot resist water, and we got married about 7 feet from the river. So I just kind of had a nightmare about him running in the water with rings tied to his wrist or something. So his only role was to stand there next to us, and pose for pictures.”

“Boone the dog has always been such a great companion for Jayce and Angie that it was no surprise to anyone that he was tasked with being the Best Boy,” photographer Chris Davis told the Press Association.

“Since the wedding ceremony was held between a beautiful lake and the even more beautiful Gallatin River it’s just a miracle that we were able to keep him out of the water until after the vows were said.”

During the ceremony, Boone dutifully lies by Conway’s side — but he ended up doing something to steal the show. Everyone laughed at Boone, even the pastor.

“It was during the opening prayer …. Boone was on the side of Jayce during the prayer, and he kind of moved forward and laid in front of us, and then decided to roll around in the grass,” Blumberg said.

Boone must be thrilled to spend the rest of his life with his parents, Jayce and Angie. Best wishes to the new couple!