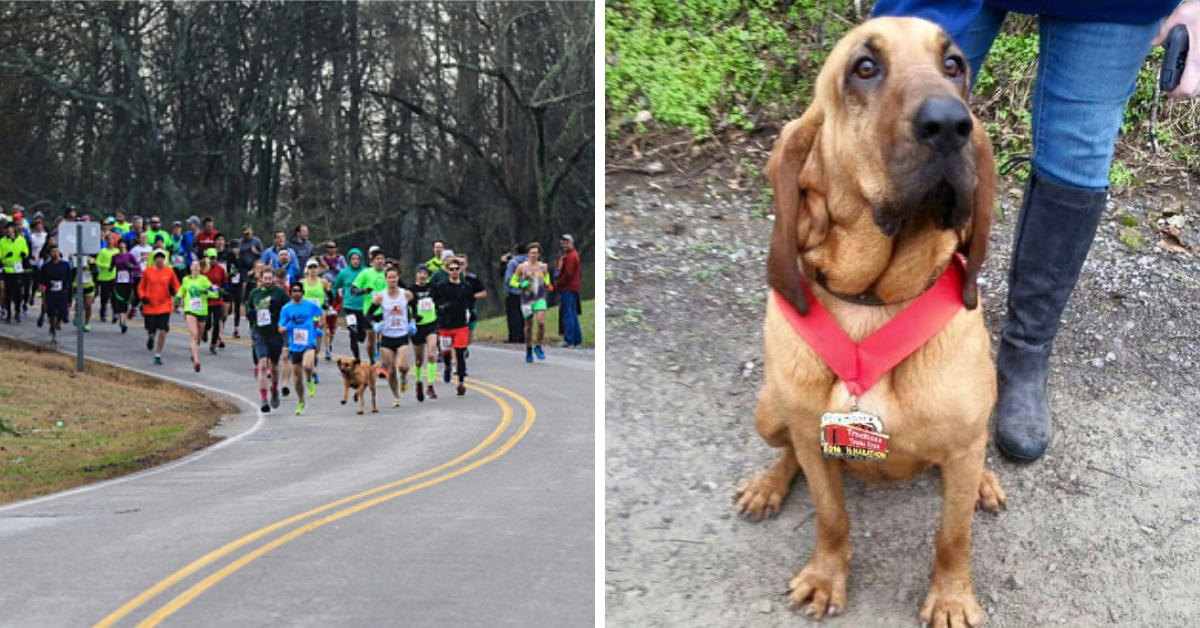 How would you feel if you get outran by a dog in a marathon?

Hundreds of runners from Alabama sure know the feeling as a two-and-a-half-year-old Bloodhound named Ludivine raced past them in a 13.5-mile marathon.

The dog put up a paw-some performance and ended the race faster than expected to take home a medal for a seventh-place finish.

Ludivine’s accidental participation in the Alabama marathon had turned her to an instant internet star! Well, she just won the hearts of thousands of social media users when her story was published online.

According to reports, Ludivine decided to join the marathon after her owner let her out for a pee.

The athletic dog snuck out of the garden fence and ran to the starting area of the Elkmont, Alabama’s 13.5-mile marathon Trackless Train Trek.

Her owner, April Hamlin, was not aware that her pet had already participated in the competition. Not until her friend sent her photos of Ludivine racing with Alabama runners!

“All I did was open the door, and she ran the race on her own accord.”

“My first reaction was that I was embarrassed and worried that she had possibly gotten in the way of the other runners.”

“She’s laid back and friendly, so I can’t believe she ran the whole half marathon because she’s actually really lazy,” April told Runner’s World.

The two-and-a-half-year-old Bloodhound went on to complete the race in 1:32:56, enough for a seventh-place finish.

Her run even came to a pause on some portions of the marathon as he mingled in a herd of cows and checked a dead rabbit.

But these breaks did not stop her from securing a spot in the top 10.

“I saw her for the first time in the parking lot before the race. She came bouncing up, and I petted her on the head.”

“I saw her collar, so I just figured she was somebody’s dog. Elkmont is a small town where everyone knows everybody, so it didn’t strike me as unusual,” stated sixth-placer Tim Horvath.

Fourth-placer Jim Clemens said,  “Every time I thought she had dropped off to go back home, I would hear her coming back up to me, and she would race past me up to the two leaders.”

“She would run off to romp through the streams and into yards to sniff around for a while.”

Ludivine’s photos were uploaded on Facebook by the Elkmont Half Marathon page.

It garnered more than 4000 likes and 1600 shares. While netizens sang praises and admirations to the hound dog in the comment section.

“That’s too cute! I love how they gave her a medal at the end,” one user commented.

“Just more evidence that animals are astronomically greater than humans,” claimed another user.

Meanwhile, Ludivine’s athletic feat had prompted the organisers to name the next half marathon after her.

“We’re a small town of about 400 people, and now that this has worldwide recognition, it makes sense to tie it back to Ludivine.”