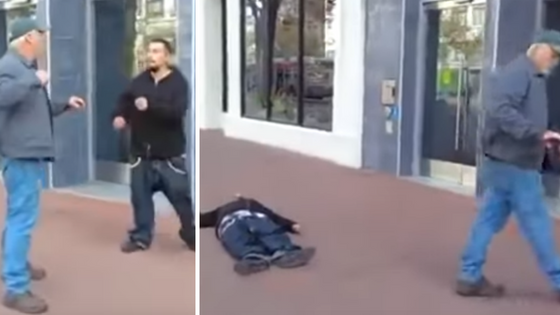 You haven’t been when they’ve been

Generations have a lot of differences especially when technology started to develop fast. Despite this, there isn’t an era that we can generally say is less than the other because they have their own golden marks.

This video is evidence that older people should not be underestimated in any way because we do not know what they can offer. They are a generation ahead of us, so there is a huge possibility they know more, if not better.

An apparently middle-aged guy once tried to pick a fight with an old man for an unknown reason. Footage coming across the internet started with the fighting pair preparing for a fist clash in front of an establishment.

The granny who’s showing no sign of panic put his grocery bag down to close his hands and prepare for a brawl. As they dance opposite each other to find a perfect opportunity to land a punch, the older man warns his challenger.

“I’m gonna hurt ya,” he repeatedly said as if giving his rival the chance to back out. But he didn’t.

At that, the older guy landed a single strong punch. And the next thing you know, the bully challenger is sleeping on the ground.

You even hurt his fingers, young man

As the cameraman astutely observed, he was yelling that the challenger was in fact “knocked the f*ck out.”

If there’s one thing we can learn from years of watching low-resolution street fights on the internet, it’s those old guys hit like Mack Trucks. This video is just further proof of that fact.

Watch how he did it below:

After watching this, I know which generation I’d bet on in a fight. It’s not my own.