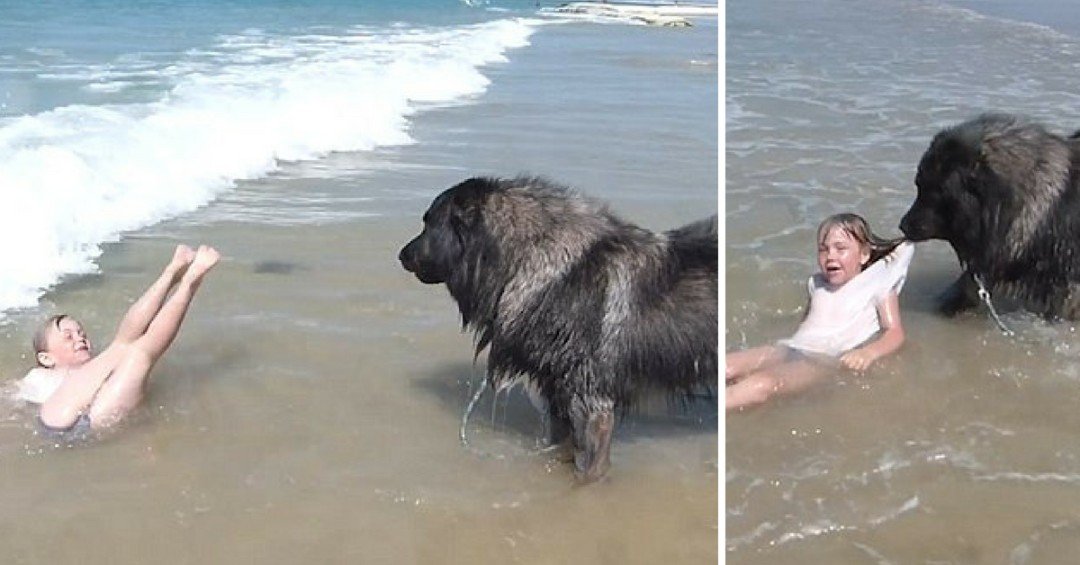 This dog grabbed his owner’s granddaughter’s shirt with his teeth and dragged her towards the beach because he thinks it’s dangerous. (Photo: Junkin Media)

First of all, what kind of dog does this owner have? Just looking at the photo above makes me want to know the giant pooch more.

This dog knew how dangerous the ocean waves were for this little girl. The adorable video down below will make you want to have this kind of dog.

We don’t deserve dogs. Be right back, crying!

According to Honest To Paws, Caucasian Mountain Shepherd dogs were bred to hunt bears in the Caucasus region of Russia, and by the looks of them, it seems that was a feat they achieved easily. These dogs were bred specifically so that they could be strong enough to take down a bear.

These big pooches can weigh up to a whopping 200 pounds, and with their super-thick coats, you can bet that they shed almost their own body weight’s worth of hair every day. Caucasian mountain dogs are naturally suspicious of strangers, which makes them great guard dogs.

Still, that doesn’t mean they aren’t lovable and affectionate. In truth, they make for absolutely wonderful pets!

This dog grabbed his owner’s granddaughter’s shirt with his teeth and dragged her towards the beach because he thinks it’s dangerous. (Photo: Junkin Media)

The video below just showed a typical day for Matyas, the Caucasian Shepherd dog, swimming with his owner’s granddaughter in the ocean near Gouville-sur-Mer, France. Until a small ripple attacked the little girl, Matyas came to action.

The mountain dog gently grabbed hold of the little girl’s shirt with his teeth and dragged her towards the beach. The thought of the waves being dangerous for the girl’s sake may have come up to his senses.

The little girl, even enjoyed the fact that Matyas was dragging him out of the ocean. Check out the hilarious footage below.

Video courtesy of Hải Anh Bùi Quang on YouTube via Daily Mail. Now tell me, who doesn’t want to have this kind of dog?