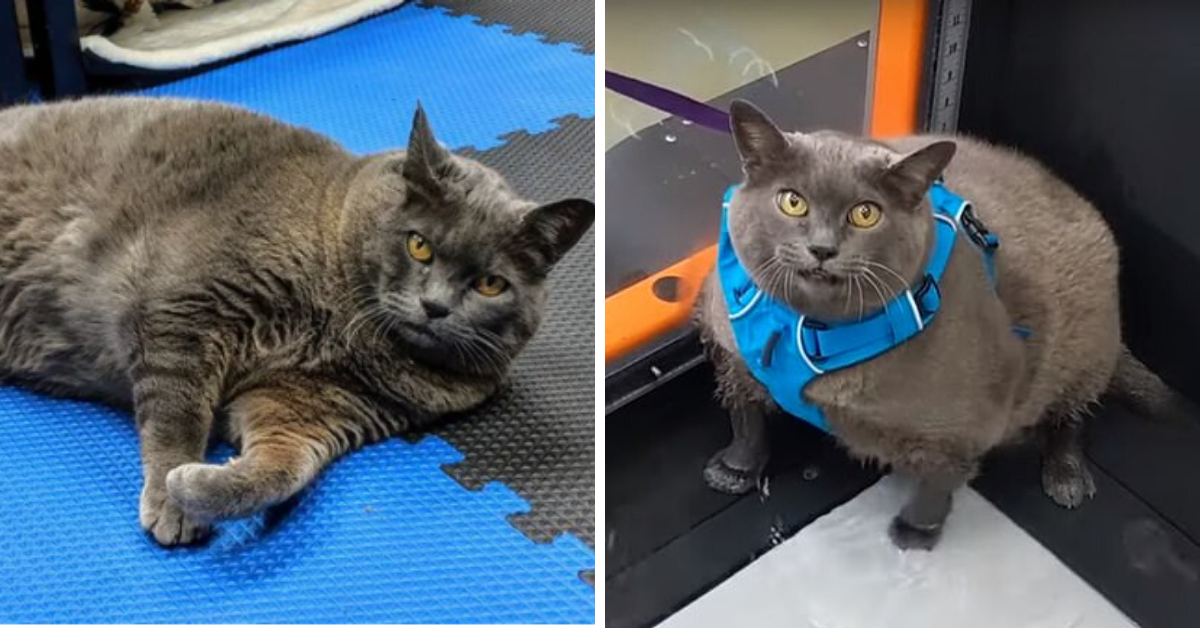 An 8-year-old cat from Washington seemed to have enjoyed her daily meals and went from slim to extremely chunky. As cute as you imagine her to be, this feline’s 25-pound (11.3kg) weight is putting her health at stake.

And though the vet tried is trying to make her follow a weight-loss regimen, a viral video of this cat with only one paw sliding on the treadmill has made her everyone’s spirit animal!

Meat Cinderblock, an adorable grey domestic, shorthair feline. Her former owner, according to medical director and veterinarian Brita Kiffney, brought her to the Northshore Veterinary Hospital in Bellingham to be euthanised.

It came to a point where Cinderblock’s owner, who happens to be struggling with health problems and taking care of her father, who has dementia, couldn’t take care of her any longer. Kiffney said that the owner really didn’t want her to be euthanised, but the father has overfed the cat and made her morbidly obese.

Kiffney could not euthanise such an adorable kitty, so she asked the owner to relinquish the cat to her instead. The owner agreed and was grateful, but the animal clinic now has obesity to deal with.

So, the vet and staff at Northshore started using an underwater treadmill to help rehabilitate Cinderblock’s physical health. But as seen on a video, the chubby feline doesn’t feel like working out — with all of us hoping she does soon.

The ultimate plan is for Northshore’s receptionist to adopt Cinderblock. However, Kiffney is currently caring for the cat who needs to follow a strict weight loss regimen. She is suffering from joint problems and is at risk for issues like diabetes and pancreatitis.

In the viral video, a man was heard asking Cinderblock if she is working out, with only of her paws working on the treadmill. She seemed a bit grumpy and didn’t agree with what they are trying to make her do, probably due to her health problems.

“Because she’s so heavy, she can’t walk more than a couple of steps right now,” said Kiffney according to Huffpost. Baby steps, Cinderblock!

Despite her look in the footage, Kiffney shared that the cat is in fact “extremely affectionate, sweet, and purrs whenever you talk to her.”

In the same statement, Kiffney added: “We are hoping to raise awareness of pet obesity, as nearly 60% of pet cats are either overweight or obese. Many people do not realise their pet is overweight.”

By scattering the kibble we encouraged her to move around the room. This does also increase her exercise albeit not dramatically. Every little bit helps👋♥️ #weightloss #keepmoving #willworkforfood #felinemedicine #petobesity #felinespecislist #abvp

Everyone is rooting for you, Cinderblock!