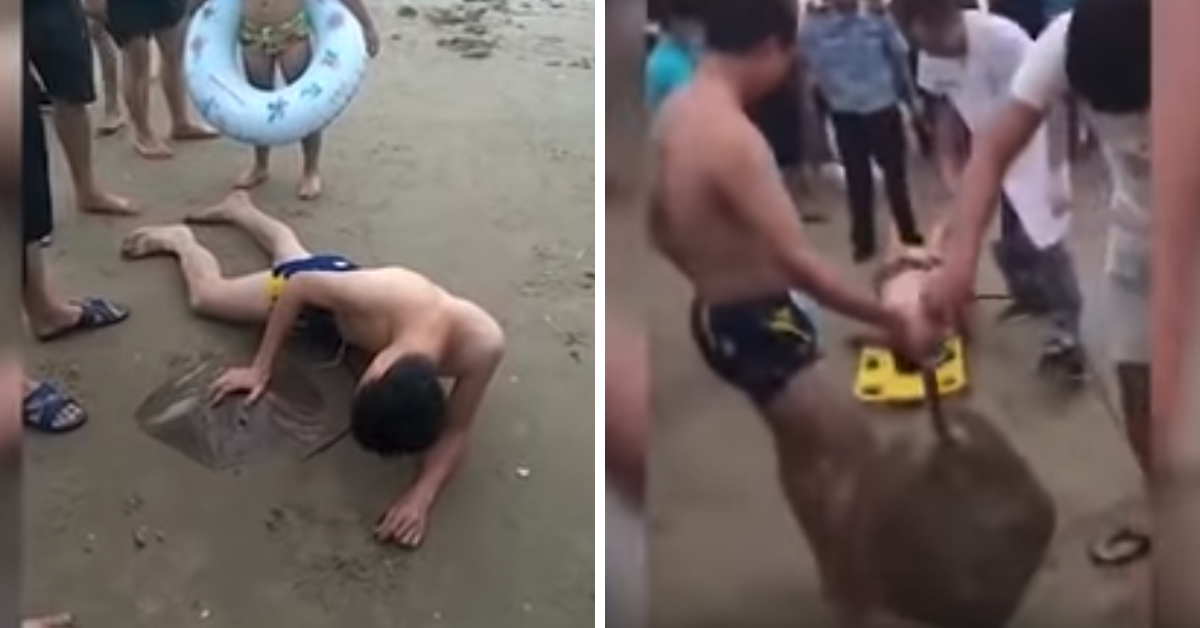 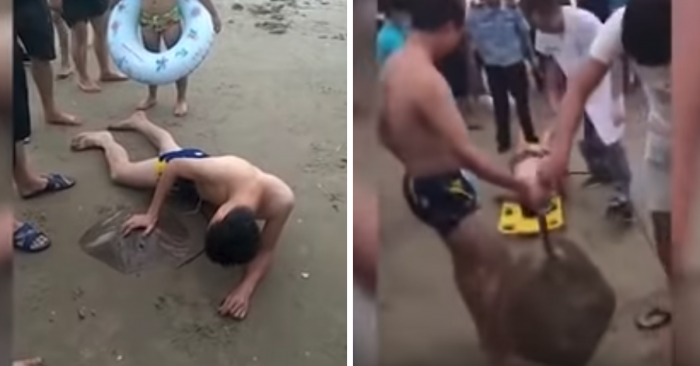 If you ever got a seashell stuck on your foot or sand in your eyes during a swim, you still might be lucky, as this man just experienced the worst day of any bloke’s life at the beach.

It was supposed to be a relaxing day at a beach in Sanya, in the Hainan province of South China, but it turned out to be one his unluckiest days.

According to reports, this man was having a blast while swimming in the sea on a sunny day, but then he got too close to an unfriendly stingray.

When he felt an excruciating pain below his waist, he quickly ran back to the shore and cried out for help as he laid on the ground. Apparently, it was a Stingray that was able to get its barbed tail stuck inside the man’s shorts.

Even though he wanted to crunch in pain, he was trying his best not to move so as not to make the situation worse.

As the man reached the shore, onlookers knew that something was up. The footage shows other horrified beachgoers surrounding the man, including police officers who were also shocked by the freak accident.

The video then jumps to when firefighters arrived and attempted to put an end to the man’s unfortunate situation. However, a member of the Sanya fire service admitted that the team didn’t have the proper equipment to help the troubled bloke.

Despite that, they still managed to untangle the Stingray’s barbed tail from the man’s private part. They weren’t sure on how to do it, but one of the firemen said:

“On the paramedic’s advice, we cut off the barbs with our tools.”

Wonder What Happened To the Bloke?

Surprisingly,  after the firefighters managed to remove the sea creature’s spine, the bloke was immediately able to recover.

One of the firemen is seen on the footage bravely holding the seemingly lifeless stingray while the unlucky man obediently follows the paramedics’ advice for a check-up.

Stingrays can be poisonous, but it has not been confirmed whether or not this man was at the risk of venom exposure.

The species of the stingray has not yet been identified, but eyewitnesses believed that it might have died on the beach.

The Ultimate Question: How Did It Happen?

There have been several cases of humans being stung by stingrays, but this man, who was stung in his privates, is something bizarre. There are a lot of questions in mind that haven’t been answered yet.

One of the most intriguing questions is, how did the stingray manage to get inside the man’s tight-fitting shorts?

Also, how did it die while being stuck on the man’s penis? Did the man try to kill it or do stingrays, just like bees, die after they sting someone?

Whatever it is, let’s all be thankful that this man is safe and that this experience won’t make him afraid of going back to the beach.

Watch the footage of the freak accident in the video below: