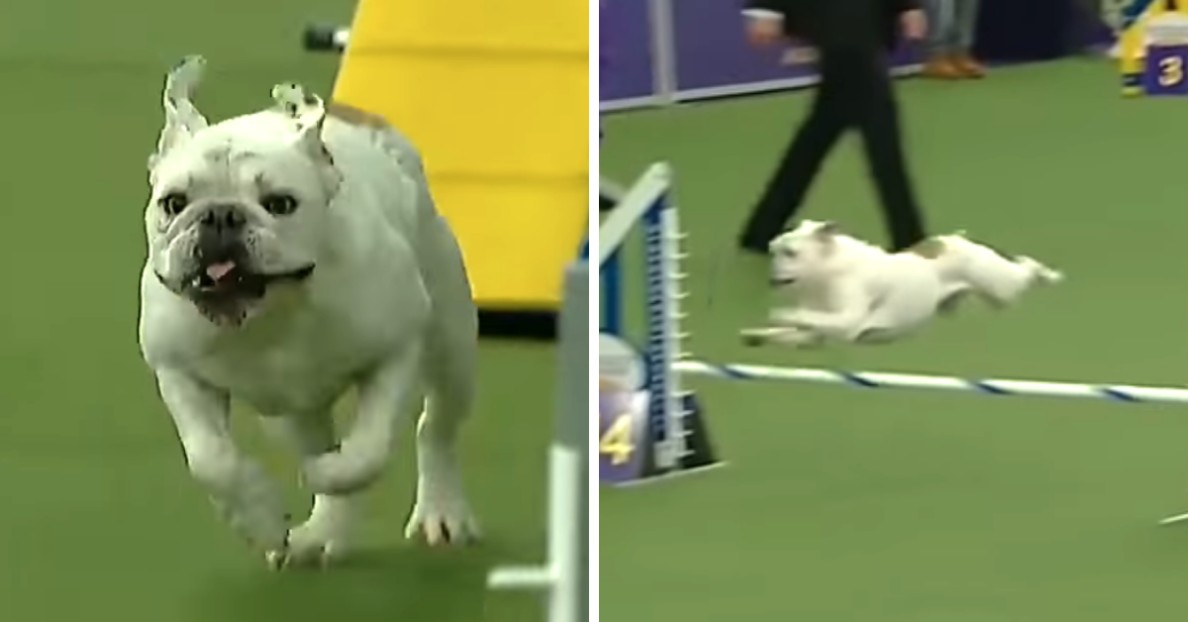 Some dog breeds are known for being energetic and high-spirited; never lacking excitement and vigour in greeting their humans as they walk towards them. Then, of course, there are the Bulldogs, who aren’t exactly kinetic but still brings joy to the heart.

Despite this stereotype, one little guy has proven that not all bulldogs merely lounge and snore all the time. He has wowed the mass after showcasing unbelievable agility in a recently-held dog race.

Let me introduce you to Rudy, an English bulldog who defied the limitations of his breed after completing an agility course at Westminster Kennel Club Dog Show in New York. He has attacked the course with unusual nimbleness for his breed to the viewers’ and Internet’s delight.

Well, it looks like bulldogs aren’t so lazy after all. Rudy’s time of 46.63 seconds ― or 51.63 with faults ― came short of the winning performance from a border collie name Verb.

Despite losing the competition, Rudy has won the hearts of the people for being the crowd favourite underdog. Check out how he stole our hearts during the #WKCDogShow below:

“RUDY” the Bulldog stole our hearts at the #WKCDogShow Masters Agility Championship in a blistering 46.63 seconds! pic.twitter.com/iMlQ2ZiqKB

Oh….no question…that doggo is the best of the best. Or…the lady might in fact be a witch……

People on social media were also fast to recognise Rudy’s talent after videos of him running the course stormed the Internet. They were equally surprised and impressed at how the ‘usually lazy breed’ was able to run at all, let alone that speed.

One person tweeted: “This is a thing I never expected to see. And I love the HELL out of it!” While another user wrote: “Wow! That’s impressive! A bulldog?!?“

Another Twitter user was in complete shock after seeing Rudy run that fast when she has two canines of his breed.

The bulldog owner wrote: “I didn’t even know bulldogs could run and I have two!!” While a fourth one said, “Look at him go! He’s so fast and agile! Go, Rudy!”

Messed It Up For Other Bulldogs

Though most of the people’s remarks on Rudy’s performance were positive, some are joking that the agile canine has now ruined things for bulldogs. They say bulldogs might have been just tricking people into thinking that they couldn’t run so owners will accept them lazing around all the time.

“Rudy done messed it up for every lazy bulldog out there,” one person wrote.

Even the commentator couldn’t help but say, “Come on, no one expected this out of a bulldog tonight.”

Well, it just goes to show that the proverb ‘you should never judge a book by its cover’ applies to dogs too, bulldogs specifically.