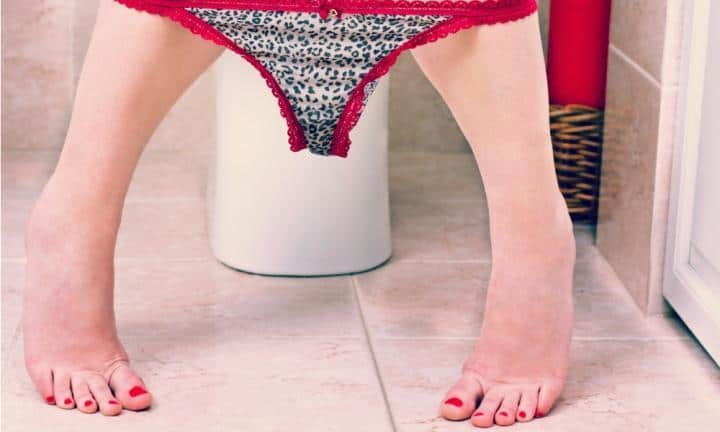 Brown discharge is a common condition in women. It’s a cervical mucus that’s tinged with old blood. The fresh red blood turns brown as the blood ages in your body. If you notice brown blood and discharge during your period, in most cases, it’s normal.

The color and consistency of your blood can change throughout the menstrual cycle; it might start as thin and watery, and then turn to thick and clumpy. As your body sheds the uterine lining in the first few days, the color of your blood is a normal, bright red. Near the end of the cycle, the discharged blood is older and may be discolored.

But there are conditions when brown discharge is cause for concern.

Why is my period brown?

This is probably one of the most common questions women ask regarding their period. Most women experience a brown period at least once during their life. As mentioned previously, brown discharge or a brown period is normal towards the end of the cycle.

You need to understand the menstrual cycle so that you understand why your period is brown. In the first days of your period, the uterine lining is being shed and expelled. And in the first few days, you’re also shedding new blood. Think of it in the same way as if you’ve cut your finger. However, the blood from the first day of your cycle gets old and discolored if left in the body.

Some of the menstrual blood remains in your genitals, and when other blood is discharged, it removes any older, discolored blood.

Therefore, if you notice brown discharge towards the end of your period, don’t panic. In most cases, it’s just a normal situation. However, if you have brown discharge instead of a period, it’s a completely different situation and probably an indicator of another issue.

In order to understand brown discharge, and answer the question as to why your period is brown, we need to look at the different types of vaginal discharge.

When it’s not normal

When your brown discharge is accompanied by any of the following symptoms, tell your doctor right away:

Just as there are different colors and types of vaginal discharge, there also different types of brown discharge. As we said previously, brown discharge is like thick brown mucus. But the color of the discharge can range between pinkish brown and dark brown. Light brown is also common and doesn’t require medical attention.

Usually, women panic because they notice brown discharge after having unprotected sexual intercourse. They believe they are pregnant. And while it’s one of the symptoms of pregnancy, it alone doesn’t mean you’re pregnant.

Here are the types of brown discharge:

Now that we know what brown discharge looks like, and we’ve answered the question why your blood is brown, let’s take a look at all the causes of brown discharge.

This is the period when your body is transitioning towards menopause. Your body is slowing down the reproductive cycle. Pregnancy isn’t common after menopause.

Women reach menopause between the ages of 45 and 55. However, some women enter menopause as early as their 30s. On the flip side, some women manage to avoid it until they reach their 60s. Nobody can tell you for sure when you will go through menopause.

The period between normal periods and menopause is called perimenopause, when the body is transitioning to lower estrogen levels. Your body can’t go from high estrogen to low estrogen in a day—it takes some time for the body to adjust. And that’s the perimenopause period, in which you might notice brown discharge.

Estrogen levels decrease slowly at the beginning, and then decrease faster during the last two years of the perimenopause period (which can last up to 4 years). However, some women stay in this stage for more than 10 years. When you haven’t had a period for 12 months, you can be certain you’re in your menopause stage.

PID, the short term for pelvic inflammatory disease, is a serious infection of the female reproductive organs. It’s one of the more concerning results of an STD. You might experience lifelong damage to the uterus, ovaries, and fallopian tubes.

PID is one of the main reasons women are infertile. More than one million women in the U.S. suffer from PID on a yearly basis. One in ten of those women become infertile.

The cause of the disease is bacteria entering the vagina. You might notice symptoms like pain when urinating, vomiting, dull pain over the lower abdomen, or brown, yellow, or green discharge.

This is more of a symptom than a cause. Brown or pink discharge can happen during ovulation. In the beginning of your cycle, the estrogen levels in your body are rising, and the uterine lining grows. After ovulation, progesterone levels rise, causing the uterine lining to thicken and mature. If you notice spotting and brown discharge, it might be a symptom that ovulation has begun and your uterine lining has grown as result of high levels of estrogen.

Irritation of the cervix

The cervix is a sensitive organ. Sometimes the simplest and smallest contact, even in safe environments, can cause irritation and brown spotting. This includes a gynecological exam, Pap smear, and even over-enthusiastic sex.

Ovarian cysts are fluid-filled sacs that can form on or inside of the ovary. These ovarian cysts are usually benign. However, they can cause pain or pressure, especially during sex or menstruation. Ultrasound is the only way to detect ovarian cysts.

Brown discharge is one of the early signs of pregnancy. Try to answer the following questions. Have you had unprotected intercourse recently? Are you trying to get pregnant? Is your brown discharge occurring instead of your period?

If the answer is yes, chances are you’re already pregnant. You might not know it yet, but you have conceived. In this case, brown discharge is a time for happiness.

Deep, penetrative sex can lead to bleeding. The difference is that this time, the blood doesn’t flow out and clot in the vagina. Later on, the blood will appear as a dark brown discharge. There is nothing to worry about it. Simply put, hardcore sex can result in healthy brown discharge.

As mentioned previously, small cervical contact might result in bleeding. Let’s talk more about that cervical examination —more precisely, a Pap examination that involves the use of soft-tipped instruments. If you’ve been to an exam, you know that physicians insert the instruments and rotate the tools inside to check your genitals. In some cases, it also requires insertion of a soft needle. These exams are frequent during pregnancy, and the cervix become more sensitive. The instruments might cause internal bleeding that later manifests as pink brown discharge.

All endocrine gland diseases affect your hormones. The thyroid is just the most common. When your thyroid is not working properly, your hormones fluctuate. And we’ve seen that an hormonal imbalance can result in brown discharge. Because the blood has a lower hemoglobin content, it has an unusual color.

As noted, brown discharge is not usually something you should panic about, and there are remedies for it—or better said, precautionary measures. Here are some of those measures:

To prevent brown discharge, make the appropriate lifestyle changes, such as incorporating healthy habits and taking necessary safety measures during intercourse. These small changes can solve most of the causes of brown blood. Bear in mind, however, that brown blood caused by pregnancy, menopause, and ovulation can’t be prevented.

1 thought on “Brown Discharge: What It Is, Its Causes, and Its Prevention”