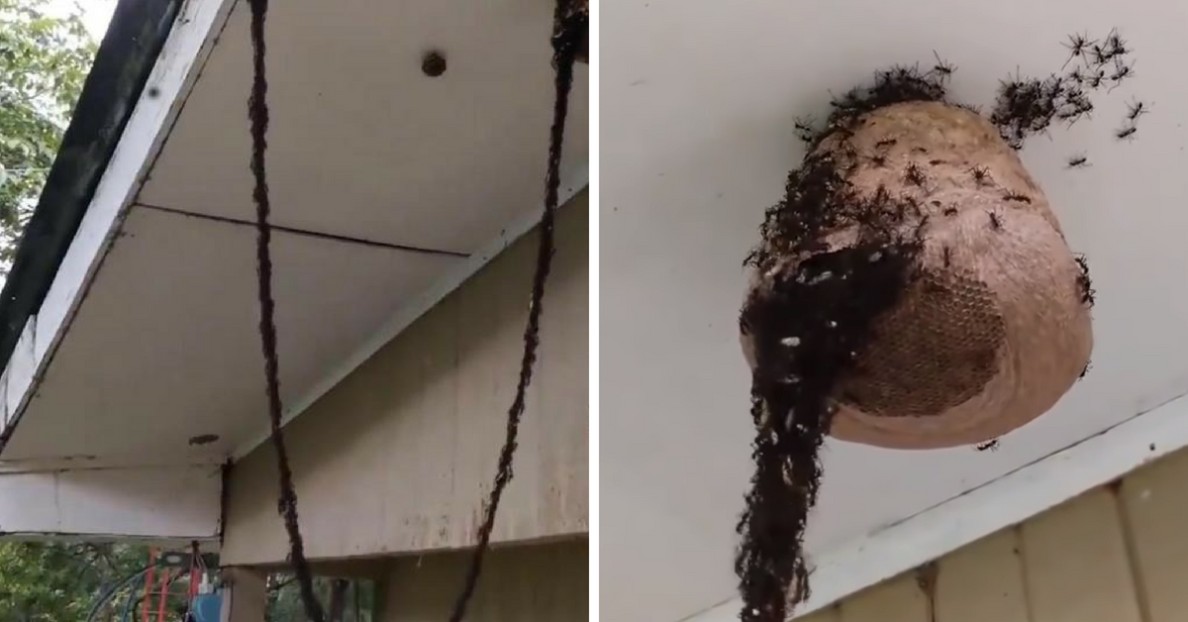 This footage is unbelievable! Francisco Boni, an electrical engineer, captured these ants building a hanging bridge and it looked like they were invading the wasp’s nest.

Millions, again, millions of ants worked together to design this hanging bridge. Well, ant man is surely impressed with these guys.

The footage posted by Boni on Twitter has garnered almost 13 thousand retweets, almost 30 thousand likes and close to 1 million views. This is insane!

He wrote on Twitter: Attack of legionary ants (also known as army ants or marabunta) to a wasp honeycomb. Impressive the level of swarm intelligence and collective computation to form that bridge.

Intelligence level 10000%. Engineers should hire them, though.

Army Ants in Their Collective Behaviour

When this type of attack happens, the wasps usually escape and the ants do not leave until they've completely looted the honeycomb, carrying pupae, larvae, and eggs, as well as some adults who did not manage to escape

They can even build across the water! pic.twitter.com/cuQxQbCor0

Further into the thread, Boni explained more about how amazing ants are, adding: “When this type of attack happens, the wasps usually escape and the ants do not leave until they’ve completely looted the honeycomb, carrying pupae, larvae, and eggs, as well as some adults who did not manage to escape.

“They can even build across the water!”

According to him, bridge formation could also more be more effective for looting and carrying loads if it provides separate lanes that allow for more efficient travelling in either direction, eliminating congestion.

Studies show that ants partly optimise traffic flow. Ants headed back to the colony loaded up with loot use center lanes, while outbands ants use the edges. Ants are also sensitive to gaps and when other ants trample over their heads, so they start to follow other rules.

Referencing EarthSky, Boni also explained that many species of ants find it tricky to walk upside down. Apparently, for ants, it’s more effective to follow the trail over a bridge that ‘goes down and then up’ than having to navigate an inverted upside-down walk.

Boni added, “For ants, it is more effective to follow the trail over a bridge that goes down and then up than in an inverted upside down walk. Also likely that upside down the ants can’t carry significant loads.”

According to Wikipedia, The name army ant (or legionary ant or marabunta) is applied to over 200 ant species, in different lineages, due to their aggressive predatory foraging groups, known as “raids”, in which huge numbers of ants forage simultaneously over a certain area.

Another Twitter user, 12:51 @godie1998, shared his knowledge about the ants’ collective behaviour.

They probably started as a straight path and started adding ants as gravity pulled the whole bunch down, so the bridge doesn't end up breaking due to linear tension. So the first minutes they built the bottom part (looks less vertical) and added on the extremes on necessity 1/

“It’s only a hypothesis but – proportional to time – their bridge is perfectly reflective of gravitational pull of an object on free fall (so, as time went on, they expanded the bridge more frequently due to increased weight),” he added.

Watch the incredible footage by Francisco Boni down below. Video courtesy of Vuzeenews News on YouTube.

Ants are amazing, aren’t they?