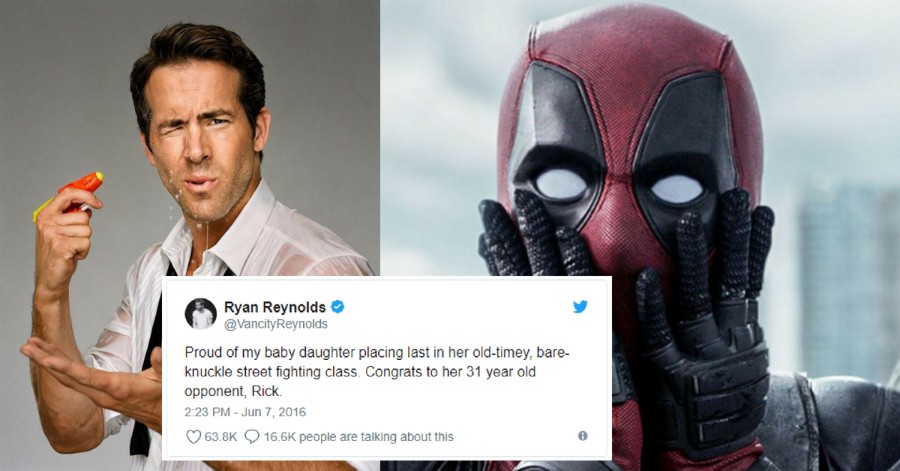 No one at this point can counter the fact that Ryan Reynolds is the perfect star to play Deadpool. After all, it can be considered as his biggest break in acting.

The psychopath, narcissist, sarcastic and foul-mouthed good guy (yes that is intended to sound ironic) that Deadpool is, is also partly Ryan himself. That’s just my opinion though, I won’t blame you if you think that Ryan Reynolds IS Deadpool, especially after these tweets.

We both love Ryan Reynolds and Deadpool, but these tweets from the brilliant actor can make us think that they may be one and the same.

Here are 20 of Ryan Reynold’s tweets to make you think that he did no acting in his Deadpool movies.

Being a Dad isn’t just about eating a huge bag of gummy-bears as your wife gives birth. It means being comfortable with the word hero.

Deadpool, despite mostly causing far more damage and death than he needed to, still sees himself as a hero of the situation. This is never a secret since you will always hear him toot his own horn.

Ryan, on the other side, is the man who can poke fun at himself while calling himself a hero for being a father. Did you see the resemblance in there?

This scene is definitely a Ryan Reynold idea. Despite of having a rollercoaster career in the past, he clearly doesn’t have an issue of reminding us about his major flops just to make us laugh.

#18 Oil Painting of a Sister

I’m making an oil painting of my sister, Sarah. And it’s more difficult than I thought because I don’t have a sister.

Who would not confuse this Tweet to be Deadpool’s and not Ryan’s? If you will ask about the best trait that this brilliant actor and his character are similar, that is being absurd.

Finally doing something constructive with my right hand. Get a limited signed Deadpool Blu-ray only at #SDCC2016 pic.twitter.com/o342OurIJn

Except for signing DVDs and Blu-rays the entire day, we all know that Deadpool and Ryan have far more productive things to do with their hands. And that is, fighting the bad guys. What were you even thinking?

Ryan clearly wants to tell that Deadpool 2 will hopefully be a good movie but probably not a great one. This honesty decreases our expectations so the production can team can exceed them if the movie turns out a great one.

#15 Some Things are More Important

Can someone settle an argument between me and my priest? Which Kardashians are pregnant?

Sometimes, people just make some things matter more than they really should.

People in LA are deathly afraid of gluten. I swear to god, you could rob a liquor store in this city with a bagel.

Ryan, or Deadpool at that, is apparently the only person who can rob a liquor store with a bagel — and make this comment about LA.

#13 How to Check Out of a Hotel Deadpool Style

When checking out of a hotel, it’s fun to say: “The fire resistant carpet deserves some sort of Fire Resistant Carpet Award!”

#12 Irresponsibility is His Middle Name; He Doesn’t Have a Last Though

This is how you make a character so iconic — create a slogan of your own. Your own version I mean.

Tinder isn’t a babysitting app. Apologies to Crystal and Janine for the misunderstanding.

It’s more of an app to find a kid to babysit together, right Ryan?

“Hurt” by Johnny Cash. Good luck making love with that song stuck in your head.

Deadpool and Ryan have this clever attitude of incorporating songs with certain situations. Take note, they are completely unnecessary as this one above.

Happy Mother’s Day, Mom. Painfully, you gave birth 468 weeks late. I was 9. We were both so happy to be free. pic.twitter.com/B7TDWRuWUe

This is the Ryan rumour Deadpool accumulated. It can be the other way around though.

Did I say that Deadpool’s middle name is irresponsibility? It’s actually sarcasm. Scratch that.

So happy to be filming #Deadpool in Vancouver. I left this great city a boy… and returned, a marginally taller boy.

Aside from being proud of his hometown, the fact that Ryan called himself as just someone ‘taller’ from his young self and not a man is definitely Deadpool.

#6 Good-hearted Deadpool for the Children

Connor McGrath woulda been 14 tomorrow. Thnx to @MakeAWish for placing me in his life. He made mine better. Love to his folks, Kim & Gerald. pic.twitter.com/jaKdDg8BGj

Deadpool can be blunt and rude, but he does have a big heart especially for children.

My daughter gets so pumped watching Disney films. She loves that they all have singing, dancing and a part when the parents die.

Let’s be honest, Disney movies, especially the princess films are not mostly pro-parents. So if Deadpool sees his child enjoy these pieces, this tweet from a father is more than necessary.

Thank you #VPD. And the great people of Vancouver for putting up with road closures and traffic delays as we film Spider-Man downtown. pic.twitter.com/EweL1TtM2k

Deadpool may be a headache for most police, Ryan is the one to appreciate them for their effort on Deadpool and its production needs.

The Founding Fathers would be stoked to know we had a Scurvy-free MTV Awards this year. Also, Epcot. They’d be impressed with Epcot Center.

This tweet is clearly meant as a joke, but the sense of perspective explored in it is just admirable.

#2 Tribute to His Fans

#Deadpool has been a privilege to make. And we got to make this film because of you. Gonna eat a samich now. #wrapped pic.twitter.com/AMW68HD2BI

Ryan is clearly thankful for the fans who support the movie he effortlessly devotes himself in.

Amazing day… Weird how they write the name in ALL CAPS. Like I’m yelling at all the nice people walking by. For eternity. pic.twitter.com/CgTVA382e5

This is the best way to yell at nice people though. Deadpool is clearly a narcissist, and seeing his name in The Hollywood Walk as something ‘yelling’ is still a Deadpool trait.